ITMO scientists created perovskite nanocrystals that preserve their unique optical properties in water and biological fluids. This material offers new opportunities for the optical visualization of biological objects. It is an important achievement for the investigation of internal organs in living organisms and monitoring of the course of diseases. The results of this study were published in the Journal of Physical Chemistry Letters. 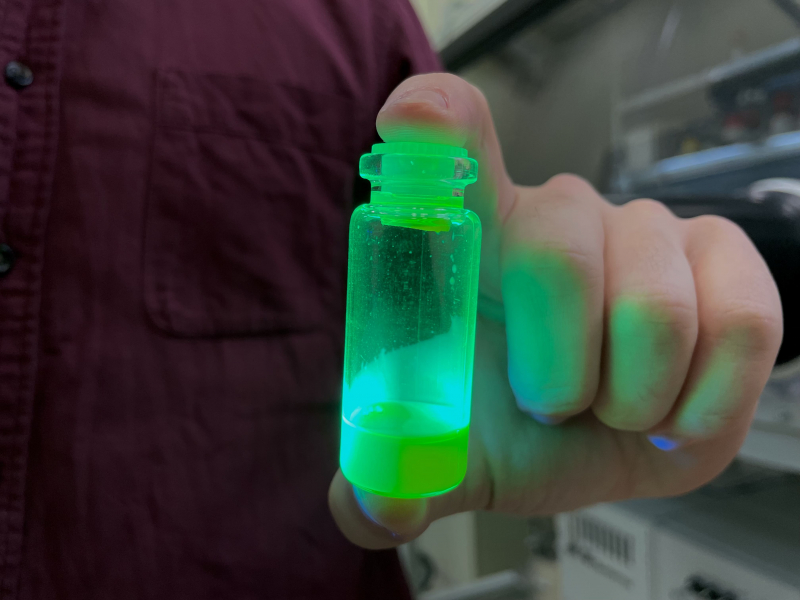 Nanomaterials based on halide perovskites are widely used in solar cells, nanolasers, and light-emitting diodes due to their unique properties, luminescence, and low cost. Their ability to absorb light is also used in the production of efficient photodetectors.

“Perovskite is an interesting and promising material that in Russia is mostly studied in regards to photovoltaics or semiconductor diodes. But its properties go beyond that. In certain conditions, it can be used in biology, and that’s what we tried to achieve,” says Oleksii Peltek, a PhD student at ITMO’s School of Physics and Engineering.

According to the researcher, perovskites are prospective for bioimaging: their nanoparticles can be potentially applied for visualization purposes in order to study biological processes in cells and living organisms.

However, there’s a limitation: if perovskites come in contact with water, they lose their physical qualities, says Mikhail Zyuzin, a research associate at ITMO’s School of Physics and Engineering. That’s why until recently, they haven’t been applied as luminescent markers. The research team decided to make this material water-resistant and stable in other biological fluids, such as cell cultures.

The scientists from ITMO’s School of Physics and Engineering used lead-halide perovskites made out of cesium, lead, and three halogens. If perovskites come in contact with water, cesium salt is immediately washed out of them and as a result, the chemical composition changes, which leads to the lack of luminescence. The researchers had to come up with a way to protect perovskites from water molecules and extra halogens.

The scientists from ITMO University have spent more than a year developing a special silicate coating. This coating was additionally modified by organic hydrophobic chemical groups. According to Lev Zelenkov, a research associate at ITMO’s School of Physics and Engineering, thanks to this coating, perovskites can preserve their properties in aqueous solutions for up to one week.

Then, the researchers decided to see how the water-resistant material will behave not only in water but also in cell cultures. They’ve added perovskites in a silicate coating to the cells.

“We incubated perovskites covered with water-resistant coating with these cells and visualized them using optical microscopy. We have tested our nanomaterial not only in water but also in cell cultures. As a model, we have used tumor cells,” says Mikhail Zyuzin.

When perovskite crystals interacted with a cell, they did not degrade and continued to emit light, which indicates their stability.

“From the point of view of physics, it’s surprising that such a chemical synthesis did not worsen optical properties of the perovskites, but allowed us to provide this material with new functions, preserve it from being dissolved, and make it safe for living cells,” says Sergey Makarov, professor at ITMO’s School of Physics and Engineering.

The next step is in vivo testing with laboratory animals. The scientists will check the stability of perovskite nanoparticles after their injection in vivo. They also plan to reduce the potential toxicity of perovskites. For instance, this can be done by replacing lead with a more eco-friendly alternative, which will make the nanomaterial safer in use.

Potentially, water-resistant halide nanocrystals can be used in bioimaging, a field at the intersection of modern advances in materials science and fluorescent microscopy. Thanks to bioimaging, researchers can study biological processes in real-time.

According to Mikhail Zyuzin, perovskite nanoparticles can be used as fluorescent markers. Their light-emitting properties can be used to detect organs in an organism. But it’s too soon to discuss this: a set of in vitro and in vivo studies is required.

Other than biology and medicine, perovskites potentially can be used in other fields, too, but this requires further research.

“By confirming the stability of our nanomaterial in various fluids, we have demonstrated only one of its potential applications. Water-resistant perovskite nanocrystals can also be used as a decorative luminescent colorant, as well as a marker for document protection. Our primary goal was to create a functional solution. Now we will test it in various conditions and applications,” says Sergey Makarov.