An international research team that includes staff members of ITMO University has developed a ceramic dual‐resonator probe for MR microscopy that was used to produce simultaneous images of two samples; the quality of the images and the time it took them were the same as they would be for a single sample examined with a regular probe. 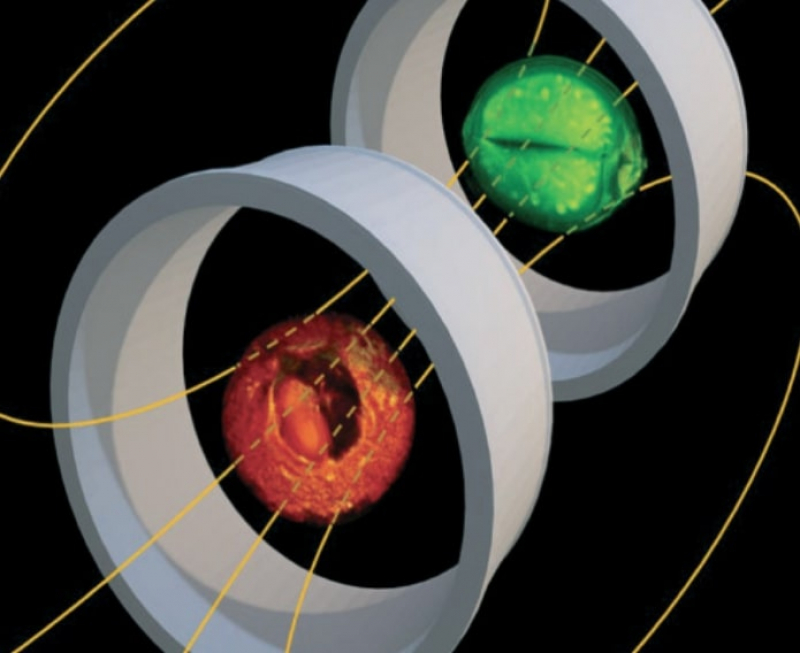 Image from the cover of the November 2020 issue of NMR in Biomedicine. Credit: onlinelibrary.wiley.com

MR tomography is one of the most insightful methods of observation and provides medical specialists with a way to assess the state of a patient’s bones, joints, blood vessels, and internal organs. But sometimes, researchers and doctors are tasked with carrying out MR imaging of not a human or an animal, but of individual cells.

“There is such a technology as magnetic resonance microscopy,” explains Stanislav Glybovski, a senior researcher at ITMO University’s Faculty of Physics and Engineering. “It is a subset of MRI that is used to visualize structures of small objects. That includes, for instance, biological tissue samples, body parts of insects, or even individual cells taken from humans or animals. For example, this technology is used to visualize the state and structure of neurons.” 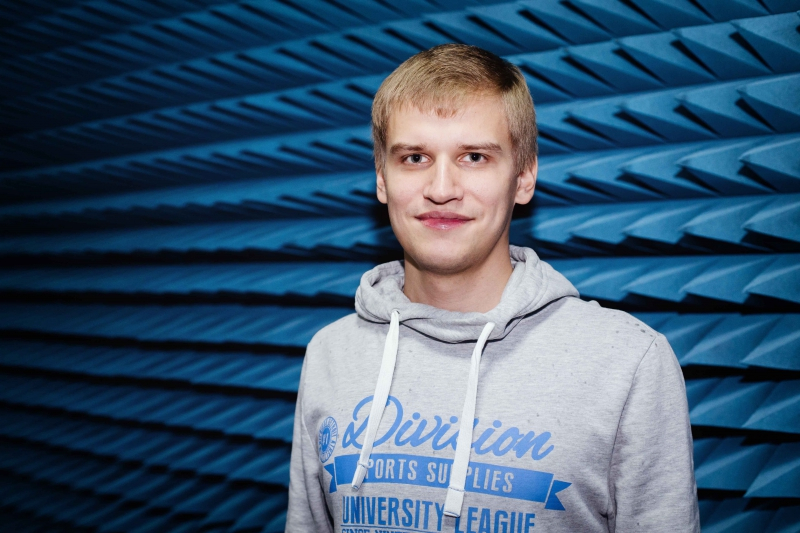 Studying such objects using MR methods offers several advantages compared to other types of microscopy. For instance, scientists are able to produce three-dimensional images that allow them to examine the internal structure of a cell. In addition, scientists can study live objects’ reactions to external inputs as they happen and, thus, perform functional tests. Finally, MR microscopy can be carried out along with spectroscopy, which helps gauge which substances are produced by a cell as part of its life cycle.

Microscopy, like all other types of magnetic resonance studies, has issues with limited resolution. Usefulsignal produced by the object of study is weak and is difficult to separate from the noise picked up by the probe. In the case of cells and other microscopic objects, this situation is even more severe, as the smaller the sample, the weaker is its signal when compared to the noise.

“The signal-to-noise ratio is inversely proportional to the size of the probe – a resonator within which the object of study is placed,” explains Stanislav Glybovski. “So if we were to take a standard coil used to scan, for instance, the human head and use it to study an individual neuron within a living person’s body, we would quickly realize that it’s not doable. But there is something else we can do. We may take a sample of biological tissue and place it within a very small resonator to boost the quality of the output signal. Right now, technology allows us to create resonators that are several micrometres to 1-2 millimeters in size.”

Today, MR microscopy makes it possible to produce high-quality images at the micrometer scale. Thanks to the development of preclinical tomography and the increase of the field level of superconducting magnets to 17 and more Tesla, several records have been set in recent years in regard to the resolution of images. But progress doesn’t stop and scientists are looking for even more precise tools.

Illustration from the article. Credit: onlinelibrary.wiley.com

But this is where researchers have run into an issue that limits the further progress of MR microscopy. From the technological standpoint, it would be very difficult to make resonators even smaller – close in size to an individual cell. Super-thin conductors used in standard probes – solenoids and loops – begin to create their own noise due to the finite skin depth of metal. On the other hand, the resolution could be increased by increasing the time of scanning and benefitting from the accumulation of useful signals. But the lifespan of cells extracted from living organisms isn’t too long; even when placed in a special solution, they can be studied for mere hours before they die.

Thus, the technology faces two different issues that limit its further development. But two years ago, the international research consortium M-Cube, among whose members are scientists from ITMO University, found a different solution to improving the quality of microscopy.

“The signal-to-noise ratio is determined not only by the size of the resonator and the length of the scan,” explains Stanislav Glybovski. “Some of the energy of the signal is expended on dissipation. It is present in all elements of the system: the coil, the cable, and the receiver. By reducing the amount of losses, we can improve the signal-to-noise ratio. We’ve proposed replacing a regular miniature coil, which is a solenoid several millimeters in size, with a volumetric ceramic resonator in the shape of a hollow cylinder and made out of a special material suggested by our partners at the company Ceramics. Conventional types of resonator ceramics that can be found on the market cannot provide a more efficient performance than a metal probe, but our colleagues were able to develop a special material based on the mixture of barium titanate and strontium titanate, which ended up being more efficient than a solenoid. Using these resonators allowed us to improve the quality of imaging by two times while maintaining the same timespan.” 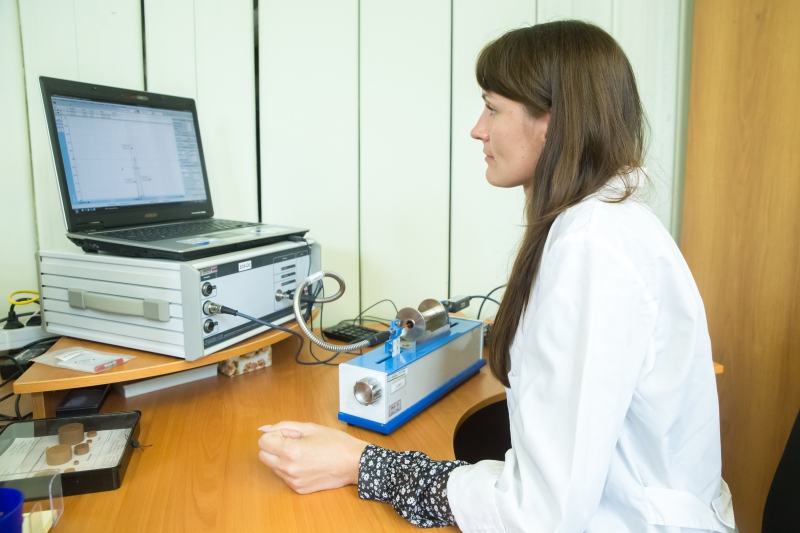 Last year, the researchers published an overview of their use of ceramic probes in microscopy. But producing such a highly efficient resonator also allowed them to make another important improvement to the MR microscopy technology. It turned out that connecting two such resonators into a system and placing them into the same scanner made it possible to conduct simultaneous analysis of two biological samples at once.

“We were able to produce microscopic images of two samples at the same time,” says Stanislav Glybovski. “We take two resonators, put them into an imaging unit, and they connect with each other by forming a collective resonance state in which both resonators contain the magnetic field that’s required to produce results. In theory, this could also be done with regular metal resonators (solenoids), but that would severely lower the quality of microscopy. There is a theorem which states that the signal-to-noise ratio decreases as the root of the number of resonators. But our ceramic resonators are so effective that we buck that rule due to the low amount of losses. We can conduct two scans at the same time and produce results of the same quality as there would be if it was a single sample analyzed using a solenoid.”

Therefore, scientists have a choice: to use a ceramic resonator to double the image quality, or maintain the same quality as when using the best metal resonators, but be able to conduct two studies at once. 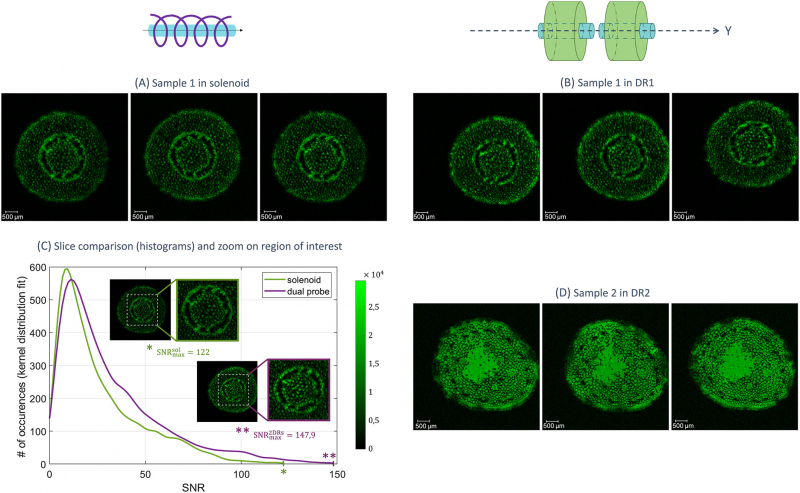 Illustration from the article. Credit: onlinelibrary.wiley.com

This research was featured on the cover of NMR in Biomedicine.