Carbon nanodots are a new trend in science, now used in smart packaging, warranty tags and with potential applications in diagnostics and tumor visualization. However, in order to be used in biomedicine, carbon nanodots have to be made visible through the human skin. This has recently been achieved by researchers from ITMO University, the Ioffe Physical-Technical Institute, and North Ossetian State University, who synthesized nanodots with unique properties: they can radiate and absorb light in the infrared spectrum. Such newly developed dots can be used for tissue visualization in medicine. Learn more about the new carbon dots synthesis method and its practical applications in this article. 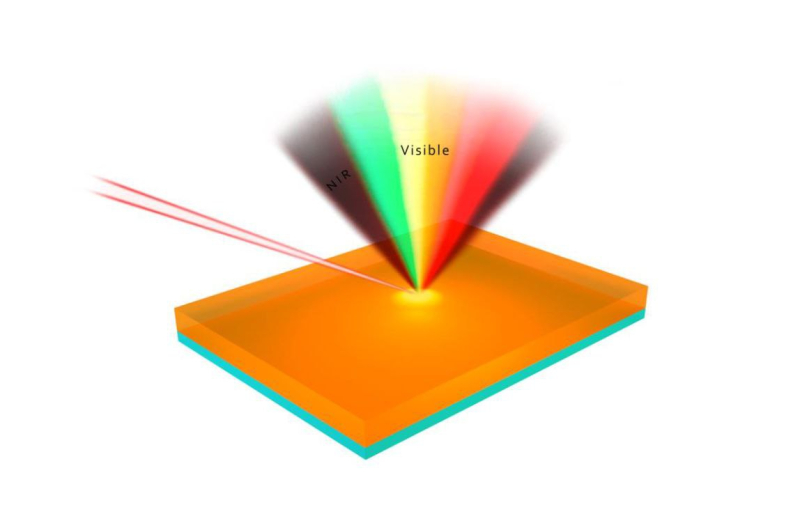 A schematic of ultra-broadband fluorescence of laser-produced carbon dots. Illustration from the article published in Laser & Photonics Review (onlinelibrary.wiley.com)

Carbon nanodots and why they are hard to use in medicine

Carbon nanodots are a relatively new class of carbon bearing nanomaterials with high fluorescent capacities: they glow when they absorb light at a specific wavelength. Additionally, they are biocompatible and easy to synthesize even from spinach leaves or juice.

“These days the most promising research is done at the intersection of different fields, such as in combinations of biology and physics or chemistry and physics. Carbon nanodots are a great interdisciplinary project that requires fundamental understanding and offers a clear potential for applications. For instance, they make it possible to conduct safe and relatively inexpensive diagnostics and visualization of processes in human tissues,” explains Mikhail Rybin, the article’s co-author and a senior researcher at ITMO’s Faculty of Physics.

However, the main problem with coloring agents and tags that can be used for tumor visualization is that they either absorb in the ultraviolet spectrum or emit in the visible spectrum of electromagnetic waves. At the same time, tissues in the human body are transparent only to waves that are 800-1,000 nanometers long, which lie in the infrared spectrum.

A team of researchers from ITMO’s Faculty of Physics, the Ioffe Physical-Technical Institute, and North Ossetian State University succeeded in synthesizing carbon nanodots that absorb and radiate in the infrared spectrum, which therefore makes them applicable for visualization of tissues and tumors.

“We have actually synthesized these carbon dots by accident. Originally, we were working on a project with 3D polymer structures that we filled with perovskites. We wanted to achieve laser generation of the structure, which is why we applied high pumping power. However, this led to the destruction of the structure, which eventually started glowing in an unexpected spectrum. We suggested that this happened because of some defects in the perovskite, but it turned out that similar luminescent properties can occur in a structure even without perovskites,” explains Ivan Shishkin, a co-author of the article and a researcher at ITMO’s Faculty of Physics.

Having conducted a structural analysis, the researchers discovered that carbon dots formed in the polymer they studied after it was subjected to laser radiation. In the replication experiment, it was possible to procure the dots not only in the 3D polymer structure but also in films of the same material.

Can they be used in practice

Additionally, the researchers have demonstrated that broadband carbon dots can be synthesized from other molecules similar to the one used in initial experiments, which was 4,4’-bis(diethylamino)benzophenone. For example, Michler's ketone is very similar, with its two benzene rings and a ketone group, while only the residuals attached to nitrogen atoms are different: ethyls in one case and methyls in the other. However, this difference didn’t have a significant effect on the spectral properties of new carbon nanodots.

This led the researchers to conclude that both the method and the substance used play a role, however the source of carbon can be changed with certain limitations. This discovery increases the chances to find practical applications for the carbon dots produced by the researchers.

“We used a relatively complex approach to synthesize carbon nanodots, however we expect that the possibility to switch the materials used in the process, as well as laser radiation conditions (such as the wavelength and type of laser) will significantly simplify the procedure,” concludes Mikhail Rybin.

First, the scientists are planning to study the characteristics of molecules used as sources of carbon in order to make the synthesis of new carbon dots more systematic. Second, the dots are now formed in a polymer matrix, which is convenient for the production of various tags. However, it will be necessary to produce carbon nanodots in large quantities and in a free state for them to be applied in biological and medical research.