The discovery of the quantum Hall effect once got its authors a Nobel prize. Previously, it has only been observed in very complex semiconductor structures with an external magnetic field. ITMO scientists and their colleagues predicted a photonic analog to the quantum Hall effect in a much simpler system – a chain of particles in a waveguide, which opens up new opportunities for creating quantum memory and quantum simulators.

Physics helps people describe the surrounding phenomena using the language of simple models. Everything – from the fall of a stone to the splitting of the atom in a nuclear reactor – can be described using equations that are based on the laws of physics. It sometimes happens that phenomena that seem to be completely different can be described using the same equations. This is great luck for physicists, as it gives them an opportunity to apply the knowledge they got from one phenomenon to another.

Recently, a team of scientists that includes staff members of ITMO University, Ioffe Institute, and their colleagues from Australian National University predicted a quantum photonic effect that is analogous to the quantum Hall effect. In the past, such behavior could only be observed in very complex systems requiring low temperatures, external magnetic fields, or a time modulation of structure parameters. However, this time scientists predicted an analog of such effect in much simpler one-dimensional quantum systems. 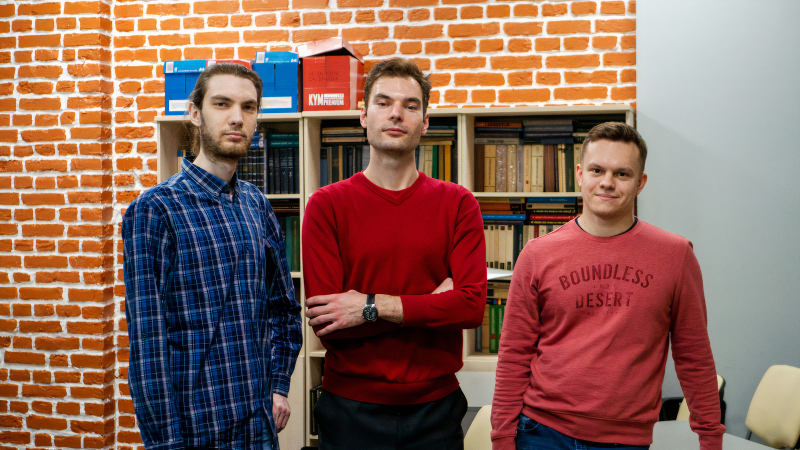 In 1879, Edwin Hall, a young American physicist, discovered a new phenomenon while working on his doctoral thesis. If you take a metal plate and let an electric current flow along one edge, there won’t be voltage at the transverse edge of the plate. But if you apply a magnetic field perpendicularly to the direction of the current, such voltage will emerge. What’s more, the emerging voltage can smoothly change its value with the magnetic field intensity. This effect was named the Hall effect.

A hundred years later, in 1980, German physicist Klaus von Klitzing discovered a new effect that he called the quantum Hall effect. If at very low temperatures one would let an electric current flow along a plate of a semiconductor like silicon or gallium arsenide in the presence of a large transverse magnetic field, then the phenomenon described by Edwin Hall will look slightly different.

“The quantum Hall effect is similar to the classical Hall effect, but the electrical conductivity gets quantized,” explains Alexander Poshakinskiy, the first author of the article. “This means the electrical resistance can change its values in a stair-step manner and not continuously as in the classical Hall effect. This discovery is very important for metrology due to the ultraprecise character of conductivity quantization which made it possible to measure fundamental physical constants with high precision and introduce a new standard for the measurement unit of resistance.” 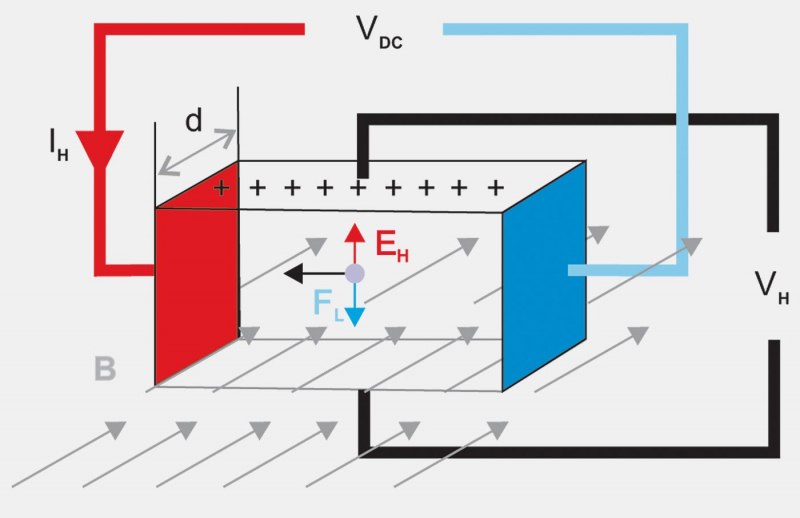 The significance of the discovery was so high that in 1985, Klaus von Klitzing was awarded the Nobel Prize in physics. The theory behind this phenomenon was developed in detail by physicists from various countries, and researchers also began to search for its analogs in other systems that have nothing to do with electric current.

Recently, an international team of scientists predicted such an effect for two quanta of light moving in a chain of superconducting qubits.

Qubits (quantum analogs of bits) are physical systems that can be realized with various platforms: atoms, ions, quantum dots, or superconducting resonators. Much as a bit in computer memory, a qubit has two basic states. However, if a bit in a common electric circuit can either exist in one of the states 0 and 1, a qubit can exist in these two states simultaneously, though in a different proportion.

Qubits can be arranged in a chain where one qubit can transfer information to the neighboring qubits. “The tight-binding model where every qubit can interact only with its closest neighbors is well-known,” explains Nikita Olekhno, a PhD student at ITMO University. “It’s like a village composed of small houses, where each inhabitant can shout something to their closest neighbor but not to someone who’s living a 100 houses apart. 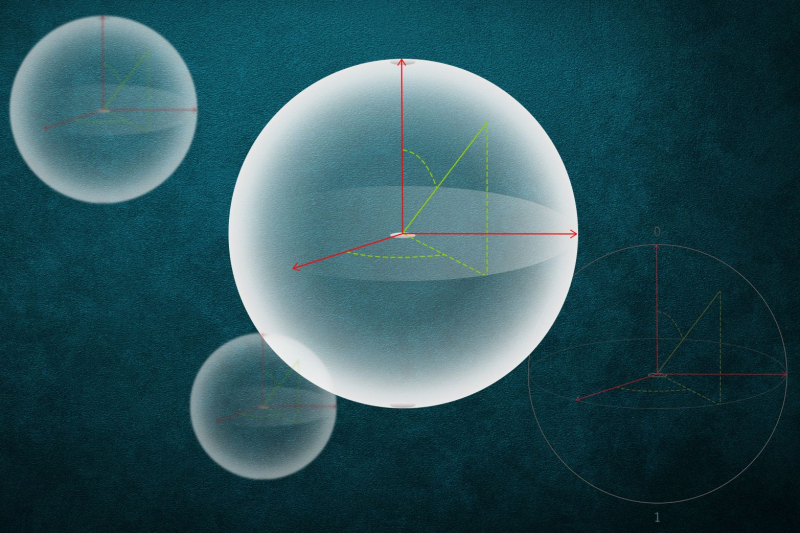 Scientists studied such a chain of qubits but  placed inside a waveguide along which photons (quanta of electromagnetic radiation) can propagate. When interacting with a qubit, a photon forms a polariton, that is, a hybrid particle that partly behaves as light and partly as matter. At some point, the excitation localized in the qubit can be emitted and turned back into a photon. Then the polariton will continue moving along the chain, jumping to other qubits, and such transfer can happen between not just neighboring qubits.

“We add a waveguide that connects all the qubits. It’s like a telephone line connecting all houses in a village,” says Nikita Olekhno. “In physics, this is called long-range interaction. Moreover, we also take into account the repulsive interaction between two polaritons. This means that every qubit in the system can absorb one photon but can’t absorb two at once. This phenomenon is called photon blockade. You see, if someone calls one “house”, then another can’t call it at the same time, as the line is busy; but they can call any other.”

It turns out that an analog of the quantum Hall effect is possible in such a system. While the behavior of electrons here has nothing to do with electric current, it is described by similar equations. Therefore, it is possible to apply the knowledge accumulated after von Klitzing’s discovery to this system. 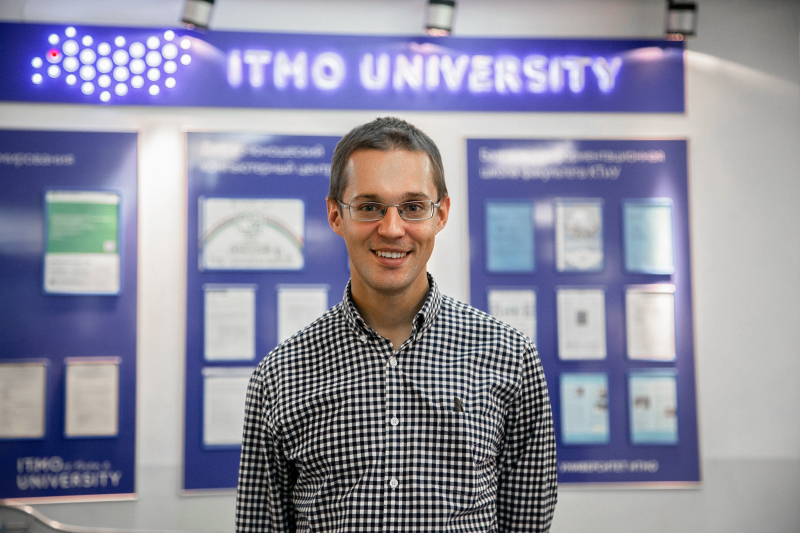 “We consider a one-dimensional chain of qubits with two photons. It turns out that this system can be represented as an equivalent two-dimensional one but with a single photon. In this new equivalent system, there will still be long-range interactions between qubits. Thanks to the long-range interaction, this model is analogous to one of the two-dimensional models with magnetic fields that are used to study the quantum Hall effect, despite the absence of external fields. This way, two-photon analogs of electronic Landau levels and edge states emerge in the chain of qubits. Regarding our system, these phenomena correspond to specific forms of the distributions characterizing the probability of one photon being detected in the qubit with number m, while the other photon is detected at the qubit with number n. What’s more, the energy spectrum of the chain of qubits becomes self-similar. In the quantum Hall effect theory, this is called Hofstadter's butterfly,” explains Prof. Alexander Poddubny, head of the research project.

Despite its focus on theoretical models, this research may have long-term practical prospects. Two-photon systems are used in quantum computing, quantum cryptography, and ultraprecise measurements. Their application is based on the quantum entanglement principle when two photons are correlated with each other. As a result, measuring the state of one photon gives information on the state of the other. “It is this unusual phenomenon that makes it possible to create quantum simulators and quantum computers, develop quantum cryptography and high-precision metrology systems,” adds Nikita Olekhno. 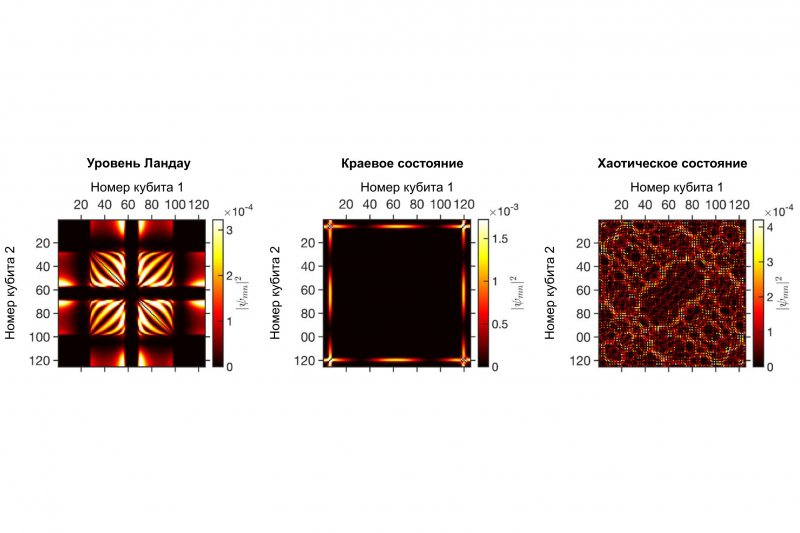 Image: the probability of detection of the first and second photons in qubits with the corresponding numbers m and n for a chain of 125 qubits in a waveguide.

Studying the connection between such entangled pairs of photons in a waveguide full of superconducting qubits and models of the quantum Hall effect will help physicists and engineers to better understand the behavior of multiphoton quantum systems. In the future, it will help to get a step closer to the practical implementation of devices for quantum information processing.

The article was published in Quantum Information.