Alexandre Nominé came to ITMO University from France to work at the University’s Metamaterials Laboratory as a materials scientist. In the course of his career he has worked in various field of physics including plasma physics and synthesizing nanoparticles. We spoke with Dr. Nomine about science, living in Russia, and learning five languages (including Russian!) 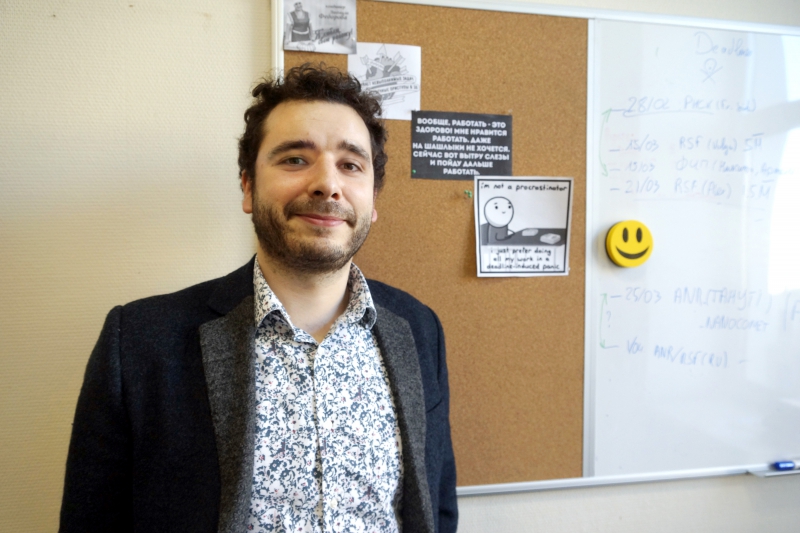 What can you tell us about your research?

My research mostly has to do with metallurgy at the nanoscale. People have worked with metals for millennia, and we have acquired quite a lot of knowledge about the ways to manipulate metals and create alloys, and also to specifically create materials with certain properties. However, in the last decades, there has been a lot of interest towards going to the nanoscale, which introduces a lot of applications in electronics, medicine, and catalysis, which is used in the research of renewable energy. I myself am not directly involved in such projects, but I have many great colleagues who are. My background is in materials science, so my job is mostly to downscale the processes of synthesizing new metals. Steel-making plants are enormously huge, and, unfortunately, simply making them smaller won’t help you make metals at the nanoscale; instead, you need to change the entire process.

A lot of my work is fundamental; I work on complex materials for optics. When we say “complex materials”, we might mean that their atomic composition has specific features or, for example, that they are combined with certain organic chains, which is basically creating a hybrid material.

What are the practical applications of these materials?

There are downscaled properties of the metals, like nanoroughness, nanohardness, etc., and there is a lot of research focused on applying these properties in solutions for some large-scale problems, for example, in mechanics. However, we mostly work on other scales. For instance, if you were to look at the screen of your smartphone, there are layers there, such as the conductive layer, that are only several nanometers thick and yet they completely change the properties of your screen. Similar to those, there are applications for anti-reflective coatings, hydrophilic and hydrophobic coatings, and all of them only require several nanometers of thickness to work. These are called functional materials and their surface is their most important feature.

Another interesting area of application for such materials is in interdisciplinary physics-medicine research, where, for instance, they can be used to discover physical effects with possible uses in drug delivery.

Your research often has to do with plasma; what could you tell about its uses and how you use it in your work?

As I said, downscaling metallurgy requires a serious change of perspective. Instead of furnaces we mostly use plasma and lasers, which provides additional benefits: not only does it downscale the process, it also provides access to conditions that are hard or impossible to achieve in regular metallurgy. With plasma, you can reach temperature and pressure up to 3,000 Kelvin and 30 bars, while the process is conducted at room temperature with atmospheric pressure, which is interesting in itself, but what is even more interesting is the gradient of the temperature or the rate of its change. Plasma can cool at a rate of millions of degrees per second; with lasers, you can reach billions. This leads us to the extreme versions of tempering and quenching: in the Middle Ages, smiths would put red-hot swords straight into icy water to cool them at hundreds, maybe a thousand degrees per second. Imagine what we could do with the instruments that we have. Materials science is a fight between thermodynamics and kinetics, and our tools allow us to create wonderful things.