A research team from ITMO University, Australian National University, and Jilin University has provided experimental proof of the conjecture that topological states of light can be produced not only by influencing the crystal lattice geometry but also by changing the shape of the meta-atoms and their mutual orientation. Moreover, the new approach helps change the position and the degree of light localization in real time. 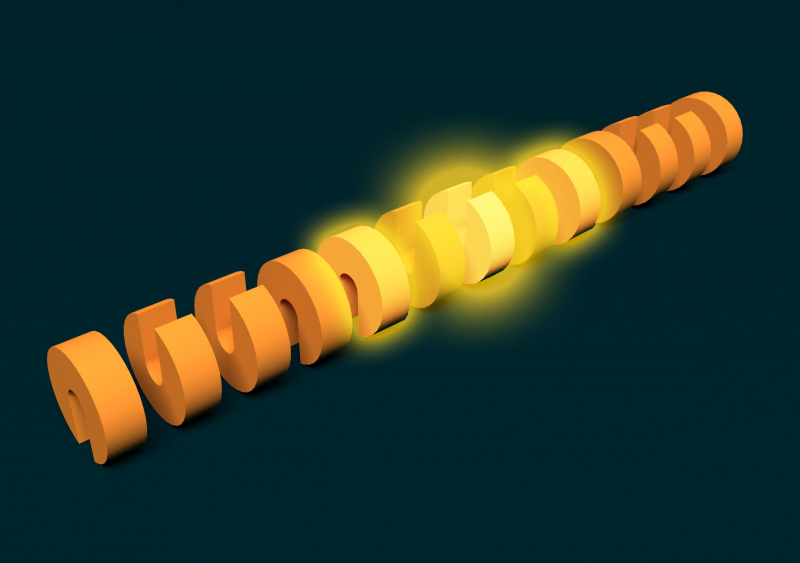 The visualization of the experiment that demostrated the efficiency of the proposed solution. Image courtesy of the article's authors.

The concept of topological states has been long researched and successfully applied in integrated and nonlinear optics. Researchers all over the world believe that topological states can enable photonic devices that will be faster, more efficient, and compact when compared to electronic tools we have today. The reason is that topological edge states allow light to propagate in a set direction along the edges and without being scattered due to defects. This means that photonic topological systems are extremely sustainable and protected from both external and internal disturbances, such as defects and heterogeneity of the material).

Topological edge states of light typically emerge in the structures with a specific geometry of their crystal lattice and manifest when they are excited by light of a specific wavelength. The simplest example of such a structure is the SHH (Su-Schrieffer-Heeger, after its authors) model. It is a one-dimensional array of resonators that interact with their closest neighbors. Such systems have already proven their efficiency as the basis of topological lasers. However, the geometry and position of particles must be set in advance during the fabrication of the lattice. This complicates the dynamic tuning of topological properties (the place and the degree of localization of the edge states), making it necessary to create a new structure with a different particle alignment.

“Imagine a finite chain of identical weights connected by two types of springs, one harder than the other. In this example, weights represent resonant frequencies and springs indicate how strongly they are connected. If we alternate the springs, the structure will acquire a nontrivial topology of the bands. This means that symmetry of the oscillation of the entire structure changes with the frequency of excitation, giving rise to the localized modes at the weak link edge,” says Daniil Bobylev, a PhD student at the School of Physics and Engineering at ITMO University and one of the authors of the article.

In similar electromagnetic systems, light can not only “freeze” in a certain place but also propagate along the edges of two-dimensional topological structures without backscattering by going around sharp angles and obstacles. It’s extremely useful in creating hardware for various applications of integrated photonics. In the future, this concept will help to create photonic circuits to replace electronic ones.

The research team from frontier lab “Probing Fundamental Physics with Topological Metamaterials” at the School of Physics and Engineering, headed by Dr. Maxim Gorlach, has suggested controlling topological states of light by controlling the particles’ properties rather than the lattice’s geometry. Such an approach allows specialists to not only locate the states but also dynamically reconfigure them.

“Control over the topological states of light is one of the key problems when it comes to further practical applications of photonic topological systems. The goal of our research was to create a new way of controlling topological states,” comments Dmitry Zhirihin, a junior research associate at the School of Physics and Engineering at ITMO University and one of the authors of the article.

The researchers demonstrated the efficiency of their solution in a microwave experiment by using a lattice made of ceramic horseshoe-shaped particles. They assembled them in a one-dimensional array (a system of coaxial asymmetric cylinders) that was, in the course of the experiment, irradiated with microwaves of a certain frequency, thus demonstrating the distribution of its electromagnetic field.

The particles were placed in the sites of the simplest lattice at a fixed distance from each other in order to prove that the change in topology occurred during their rotation and not because their position in the grate changed:

“When we rotated ceramic discs, we could see how localization changed from being concentrated in the center to complete disappearance, which corresponds to a change from nontrivial structure to a trivial one. This proved our theoretical assumptions and the quantitative modeling that we’ve demonstrated in our previous papers. This also opens new horizons. For example, our installation can be potentially useful for the development of topological waveguides, resonators, and 6G switches,” says Daniil Bobylev.

The new approach is applicable not only in the microwave range but also the optical one –  though the authors admit that at the nanoscale, it would be harder to implement due to the complexity of manufacturing noncentrosymmetric nanoparticles. However, the authors are sure that their result opens up new ways of designing photonic topological insulators, and with time, it can be adapted for the optical band. The high potential of the results is also substantiated by the fact that this research was featured on the cover of the recent edition of ACS Photonics.

This research is being carried out at the Frontier Laboratory “Probing Fundamental Physics with Topological Metamaterials” as part of ITMO’s 2030 Development Strategy and with the support of Russian Science Foundation.

“This project is one of our prospective research areas. Another reason why flexible reconstruction of the metamaterial’s properties is important to us is that it can be applied in the search for dark matter using resonators built on wires. Our next step is to sum up the achieved results and apply them to two-dimensional states,” concludes the head of the laboratory Dr. Maxim Gorlach.