In recent years, oncological diseases have become one of the most wide-spread causes of death in developed countries – and despite the abundant new diagnostics and treatment methods, fighting cancer is still a challenge. Nearly all known treatments have significant side effects, while some of them are even helpless against more persistent cancer cells. One solution to this problem is photothermal therapy, on its own or in combination with other treatments. Researchers from ITMO University have suggested a new method to treat melanoma more effectively and safely using gold nanoparticles. Read on to learn more about the new method. 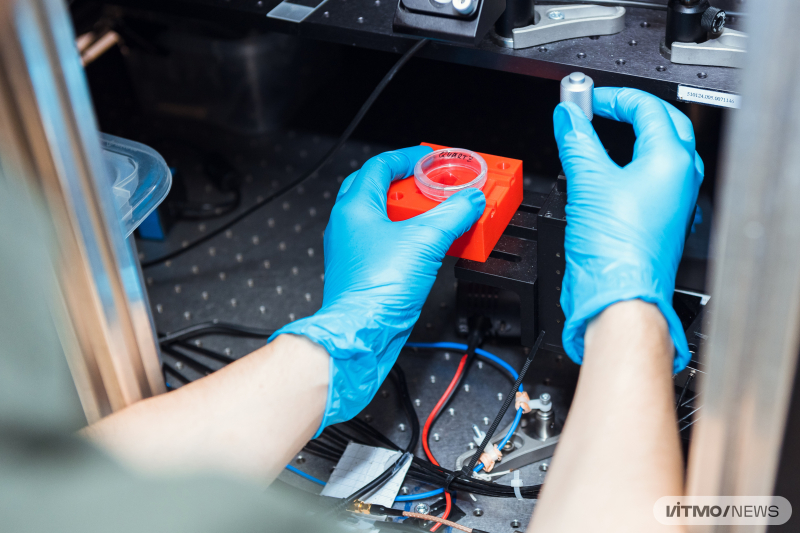 Measuring the fluorescence lifetime of rhodamine that was used to color the melanoma cells associated with gold nanoparticles. Photo by Dmitry Grigoryev, ITMO.NEWS

Oncology globally: one challenge after the other

For a long time, cardiovascular diseases have been the leading cause of death globally, however, now oncological diseases are taking their place in many developed countries. For instance, according to the Ministry of Health of the Russian Federation, about 10,000 patients are diagnosed with melanoma, i.e. skin cancer, in Russia every year. This type of cancer is one of the most challenging to beat, because it’s hard to detect, but fast to spread.

In its early stages, melanoma can be treated with surgeries and, as it develops, with chemotherapy, however, both of these methods have their drawbacks which sometimes render treatment ineffective. That’s why researchers are working on a higher quality, universal and safe treatment method.

One such promising method is photothermal therapy, where molecules or nanoparticles are accumulated in the region of the tumor and then heated up with a laser. When tumor cells are targeted in this way, they can get overheated and die.

This method has three important advantages. First of all, cancer cells don’t have a mechanism that would protect them from overheating, which means that they will not be able to develop a resistance to this kind of therapy. Second, this method is highly selective, as it can target different tissues. Third, the death of cells caused by such overheating boosts the immune system, adding to the treatment’s efficiency.

There are two ways to deliver the nanoparticles needed in this method to the necessary location in the body: via an injection or using the blood flow. The latter is possible because a malignant tumor is essentially an unstructured mass of actively dividing cells, which all require a lot of oxygen and nutrients. This means that there is an active flow of blood toward the tumor. However, the cells are dividing too fast for new blood vessels to form properly, which leads to many holes in their walls – and that’s where the nanoparticles get caught in. This way, they accumulate in the region of the tumor.

Cells choose how to die

However, photothermal therapy is not devoid of drawbacks, too. For instance, there are two ways a cell can die in its course: either the conditions become too harsh for the cell and it “decides” to die (apoptosis) or the treatment damages the cell so badly that it can no longer function (necrosis). Either way, the cancerous cell dies, however, the way it does so matters, because necrosis leads to inflammation, which is not only an additional strain for the body, but also leads to increased blood flow that can result in a more active cancerous growth.

Adding a bit of color

Researchers from ITMO University, headed by Oleksii Peltek, a PhD student and junior researcher at the School of Physics and Engineering, have developed their own method to measure the temperature inside a cell using fluorophores.

When should the heating stop

In order to test this hypothesis, the researchers used gold nanoparticles and a laser with the wavelength of 1,064 nanometers (near-infrared spectrum). This wavelength was not a random choice: the laser had to reach the tumor through tissues, and this can be done only in the part of the spectrum, where the waves least interact with human cells. The researchers chose mouse melanoma cells as a test object, because this tumor is located on a body’s surface, which makes it easier to be treated with a laser.

“For our experiment, we needed the particles that would absorb light within the tissues’ transmission window. Even though many nanoparticles would fulfill this parameter, gold particles don’t interact with tissues and are good at absorbing at the wavelength about 1,000 nanometers, which allows us to use a smaller amount of nanoparticles to reach the needed temperature. Moreover, gold nanoparticles are classical objects in photothermal therapy. We focused on developing and showcasing a new method for measuring temperature, so we wanted to stick to something well-known and studied as our object. This way we could ensure that our method is working and the results we get are compatible with those demonstrated in earlier studies,” explains Oleksii Peltek, the article’s first author.

Researchers from ITMO collaborated with scientists from Pavlov First State Medical University of St. Petersburg on this experiment with cell lines and discovered that when cells are heated up to 42°С, it leads to apoptosis, while further heating over 46°С causes necrosis. After these values were calculated, the researchers could create the optimal conditions for photothermal therapy in preclinical trials.

Having developed the new method and identified the optimal temperatures for treatment, the researchers published their findings in Nanophotonics, however their work didn’t stop there. Currently, the scientists have completed the preclinical trials on lab mice, conducting photothermal therapy with gold nanoparticles and attempting to create optimal heating conditions to trigger apoptosis of cancer cells. Currently, the researchers are working on a new publication, where they compare combinations of different ways to combat tumors.

Here, too, there was room for collaboration: specialists from the vivarium at St. Petersburg State Chemical Pharmaceutical University helped ITMO’s researchers to breed and take care of lab mice, some of which later underwent radionuclide treatment at the Russian Research Center for Radiology and Surgical Technologies.

Two therapies are better than one: practical applications

You might wonder why the researchers decided to analyze the effectiveness of combinations of different methods for their second publication. The reason behind it is that destroying the tumor completely by the photothermal method can lead to complications for the patient, while the immune response caused by apoptosis is not enough for the body to cope with the illness on its own. That is why combining photothermal therapy with the radionuclide method and chemotherapy can help achieve better results. For instance, following photothermal treatment with chemotherapy can help get rid of the remaining cancer cells and cut down on the doses of chemotherapeutic agents. Additionally, using a combination of different methods can lower the risk of cancer cells developing resistance to one particular treatment.

“The absorption properties of gold nanoparticles in the near-infrared spectrum make them a wonderful material for photothermal therapy. There is a great number of articles on this method, with some of the projects even reaching clinical trials. One of the approaches now is combining the cancer treatments developed earlier to produce combined effects, because we already understand the mechanisms behind them. Photothermal therapy is gradually moving from the scientific frontier towards the realm of practical applications. I think in just about five years we will see it applied in actual clinical cases,” concludes Oleksii Peltek.