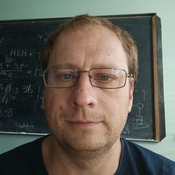 Dr. Ivan Terekhov
Budker Institute of Nuclear Physics, Novosibirsk State University
Electron-electron and electron-hole interaction in Dirac-like materials
Every week we will send you an e-mail with a digest of scientific events. Subscribe and wait for an e-mail!
Subscribe
Abstract

The electron-electron and electron-hole interaction affects many physical effects, e.g., the compressibility of the electron gas, transport properties of the material, the energy of the exciton, the screening of an impurities. The introduction of such interaction in the Dirac-like materials is not a simple problem since the electrons below Fermi surface can significantly change the interaction. We investigate the interaction between electrons in graphene and in 2D transition metal dichalcogenides (TMD). We consider the simple quantum mechanical model of two interacting electrons and Bethe-Salpeter equation describing the interaction of two electrons at arbitrary value of the Fermi energy in graphene. We obtain that in both models the dynamics of the system is very unusual. The time evolution of the wave packet, corresponding to the scattering problem setup, leads to the appearance of the localized state at large time. Moreover, for $E_f<0$ there is an infinite set of the localized solutions with the finite norms.

In 2D TMDs the two models are considered: the simple quantum mechanical model of interacting an electron and a hole and the model based on the Bethe-Salpeter equation. We demonstrate that in the singular potential the models give different results for the exciton energy.