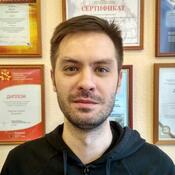 Mr. Sergey Pavlov
Ioffe Institute
Resonance optical and magneto-optical effects in magnetite-based diffraction structures
Every week we will send you an e-mail with a digest of scientific events. Subscribe and wait for an e-mail!
Subscribe
Abstract

Magneto-optical effects in magnetic nanostructure materials are currently attracting a great deal of attention because they provide a possibility to control the intensity of reflected and transmitted light [1–3]. One of the most common and prominent intensity effects is the transverse magneto-optical Kerr effect (TMOKE), which is defined by the relative change of the reflected or transmitted light intensities for the two opposite directions of an in-plane magnetization. The factor limiting the TMOKE applicability is its low value, that is about 0.1% in common bulk ferromagnetics, e.g. iron, nickel, cobalt [4].

Recent advances in nanotechnology allow one to synthesize magnetic nanostructures where the magnitude of TMOKE is significantly increased in the vicinity of optical resonances, plasmonic or waveguide. TMOKE enhancement up to 1000 times has been reported in bismuth-substituted iron garnets (BIGs) covered with gold gratings [5,6].

The great interest in TMOKE properties of magnetite (Fe3O4) is due to it has TMOKE magnitude comparable to ferromagnetic metals while its optical absorption is much lower. Magnetite films fabricated by laser electrodispersion demonstrate even better magnetic properties than crystal magnetite [7] and are perspective for magneto-optical applications.

The work presents our results on investigation of resonant optical effects in diffraction magnetite-based structures and their influence on the magneto-optical Kerr effect.